Hey Boys, Remember that one Time when Christmas was Cancelled…

People have been asking me how our Christmas was…well? Let me tell you.

This pic was taken Christmas morning. 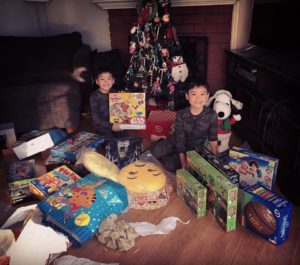 4 hours later, they acted like complete ungrateful little humans and they were fighting nonstop. Drama ensued between them and we put our foot down. So they had it all taken away…along with every single toy in their room and their iPads. We made the boys take down the Christmas tree and decorations too.

All they have access to for the next two weeks (one week if they are freakin spectacular) are math cards and books. They’ll be earning their Christmas toys back one by one with good behavior when they are done being grounded.

We follow through with our punishments, even if it’s Christmas Day.

Are they horrible kids? Nope, they are good kids but when you have a privileged life and you take things for granted and treat eachother like crap when other kids would do anything for a sibling, you don’t get away with that kind of nonsense.

And when you say mean things to one another? Hell no. They have to learn about the power of words and how much they can destroy a persons self esteem.

That doesn’t fly for mommy and daddy Kobzeff.

Are we still mad? Nope…we’re just fine and we all had a good Christmas regardless of what happened but they will know what it’s like to have limited access to luxuries other kids dream of for a couple of weeks.

People can call us mean all they want but we ain’t raising no self entitled buttholes. We see way too many kids get away with too many things and their parents do absolutely nothing about it or ignore it…and years later, they wonder why their kids turned out the way they did. Nope. That ain’t happening in my house. This is hard for us too but this will hopefully be one of the greatest lessons we can give them as parents.

Why am I sharing this in the world of fb where unicorns poop rainbows and glitter and kids are angels and so perfect?

Because parenting is hard. Because even good kids can act like little turds. Because there are days when we have no idea what the hell we’re doing but we do things even if it hurts our heart too. Because sometimes we wonder if we were even fit to be parents. Because as parents we have to do things we don’t want to but must for the greater good. Because I know Mike and I aren’t the only parents who do things like this.

But more importantly, because If you had a similar day, just know that you are not alone and your kids weren’t the only poopoocacaheads on Christmas Day.

As for me? Mike and the boys are sleeping and I’m sipping my beer about to read a book I’ve been waiting a while to read.

Good night friends, hope it was a good one.
Tomorrow will be a better day. 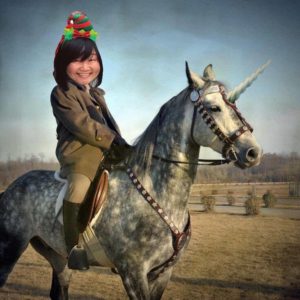