Soooo…I was totally wrong. I was so mad when it was first announced that Gal Gadot was going to be the iconic Wonder Woman. I threw a hissy fit cause I thought she was wrong wrong wrong!! Then I saw her in Batman V. Superman: Dawn of Justice and I was in awe.

Duuudes!!! You have to go watch the radness that is WONDER WOMAN!!

Global opening of $223 million this past weekend. Wonder Woman, go on with yo bad self. 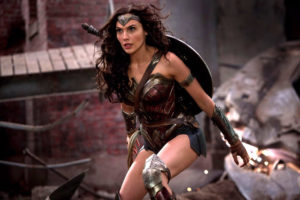 I’ve been reading so many conflicting controversial articles about this movie with people fighting that it’s only about woman empowerment, that it makes the male sex look evil, that it’s dumb…so much pressure put on the movie too because it’s the first superhero movie in years where a woman is the hero.

I don’t know what the hell these people are talking about because I got an entirely different message from it. It’s about HUMAN empowerment. It’s about how powerful love for your fellow man and woman can be. It’s about working together no matter how impossible something may seem.

So powerful in fact, that it could possibly save the world.

I laughed, cried, cheered and got all kinds of veheklempt…and in some scenes all at the same time

It was nice for a change to see a male as the sidekick in a female charged superhero movie and Patty Jenkins did it in a way where he wasn’t some silly and feeble sidekick next to a warrior princess…Chris Pine did an excellent job bringing, charm, humor and badassery all on his own in this film.

It was also rad to see a superhero movie where gore and CGI didn’t overpower the entire movie. I don’t know how Patty Jenkins who directed the award winning movie, “Monster” did it but she made this film just as majectic, grandiose and powerful without any of the over fluff stuff. This is something you have to see for yourself.

The first time Wonder Woman fights in her badass costume…I cried. I know i wasn’t the only one in the theatre who got goosebumps and felt empowered during that scene. 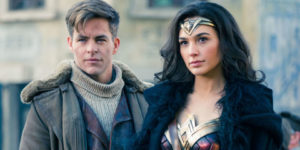 I remember as a little girl, I would wear my Wonder Woman underoos and tank top set and go to Mile Square Park to play as a kid. One day, I honestly felt like I too could be Wonder Woman, so I summoned my invisible plane on top of the spiral slide and jumped off.

I broke my collar bone.

I realized I wasn’t Wonder Woman after all, but that was the very first moment, at the age of 5, where I felt empowerment as a little girl.

Now as an adult who is always surrounded by strong women and as a mother who would do anything for her children…you realize that you don’t need a costume to feel powerful, kind, badass and save the world.

Ladies, we wear our invisible capes every damn day. Let’s do it justice.

I can’t wait to take my boys to see this movie! 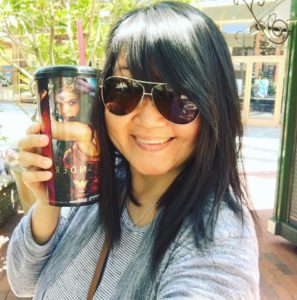 Don’t forget to get your Wonder Woman Souvenir cup at the concession stand! I will only be drinking beer out of this from now on, haha. No I’m totally serious.

***For mom’s and dad’s who are wondering if it’s safe for kids to watch: The director said she was very mindful during the filming process cause she knew little girls and boys would want to go see it and she did a phenomenal job of it.  There was no real visible blood or gross stuff…there’s fighting but it’s done in a beautiful way. No sex scenes, no cussing…a few scenes where it could be scary but I’m going to go into this movie telling the kids that there are a few scenes where people can look kinda scary but that it’s all makeup and fake…and to pay attention to the message and how people work together to do good