Sooo…Mike and I got married 9 years ago today. 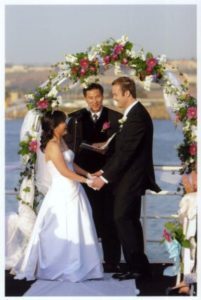 if you missed it, here’s the story of how we met 😉

During these years of dorks in holy matrimoniage (I just totally made up this word), we’ve learned a whole lotta things about each other! Some good, some bad and some horrifically ugly…

We both have bad tempers. We both love the Jesus but cuss a lot. We’re both judgemental, opinionated and stubborn. We both snore and hate to clean. We both love beer but he loves IPA’s and I love Stouts and Dark beers. He hates fish and I love fish but we both love the sushi…um, he owns a lot of rad shoes and clothes, I own 10 pairs of TOMS and a whole lotta leggings and super hero T-shirts.

I think Magnolia was a great movie, Mike thinks it’s the most pretentious movie ever made and wants 3 hours and 8 minutes of his life back. When watching romantic movies, he like to roll his eyes and say, “Oh Gaaaaaaawd…” every 10 minutes. We both think The Goonies, The Last Dragon, Big Trouble in Little China and Nacho Libre are some of the best movies every made in the history of cinema.

There was a time whem he wanted to move the family to Montana and I was like, “But I’m Asian.”

We laugh together but mostly we laugh at each other. Laughter is powerful in our home. Once that stops…we’re in big doodoo trouble.

We both love the artist Mark Ryden, we love rustic decor, I love pasta, he doesn’t…he’s more of a Republican while I’m more of a Libertarian. He loves chocolate, I do not. He’s a morning person, I’m a night owl. I love seafood, he isn’t much of a fan. We both couldn’t care less about keeping up with the Joneses, we’ve never been flashy people, we invest in our kids. We’re both complete dorks. He likes to throw stuff away arooooound the little bathroom trashcan and not in it. He takes long shower (“I’m a big man, babe!), I take short showers (“Cause you’re little, babe!”).

When I’ve been a dumbass, I apologize. When he’s been a dumbass, he makes me homemade apology cards and does whatever ridiculous thing he could come up with to make me laugh. When we’re out in public and the kids misbehave and I’m having a talk with the boys to be good, Mike likes to say really loudly, “Ma’am, will you control your children…” When people walk by us. 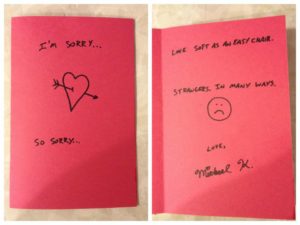 We’ve both also learned that marriage is super duper hard.

We’ve heard it all.

“You two come from totally different upbringings…you won’t make it.”

“If things don’t work out, people are going to say they aren’t surprised…”

We are indeed different and we have most definitely battled things because of different upbringings and clashing of the cultures.

BUT…it’s also made us better people. He likes to say I’ve made him a nicer person and that he’s made me become a more no nonsense evil person, haha. We’ve opened one anothers eyes to things we were so grounded on. We’ve made each other better…because we chose that. We put faith and effort into ourselves and in each other and it’s made all the difference.

It takes A LOT of work to make a marriage work. Throw in kids and curve balls that life likes to chuck at you out of nowhere and HOLY CRAP!!! It gets alllll kinds of craycray.

And let’s keep it real real. There’s been some dark, ugly times…moments when we didn’t know If we’d make it. Moments when we questioned things about ourselves, our role as parents and spouses.

I think this is totally normal.

But hey, at the end of the day, every shouting match, all the tears shed, the thoughts of “What the hell was I thinking!?” and misunderstanding is fleeting. We work it out and communicate calmly and passionately until we’re both happy because the truth is, underneath the anger, hurt and different beliefs and opinions…exists the very things that brought us together to be one.

Our core 6 rules that keeps us steady, balanced and true.

Can’t wait till next year when we renew our vows for our 10th. We’re gonna have kegs, a whole lotta cake and everythaaang.