On the morning of September 11th 2001, I was running late to work so I didn’t even bother turning on my car radio…I was just focused on getting from point A to B. When I got to work that morning, I was met with the kind of eerie silence that grabs a hold of you in the most confused way.

I went to the bathroom and two of my co-workers were in there looking somber and chatting quietly. I asked them what was wrong and they said, “Omigod, you haven’t heard or seen what’s happened in the east coast?”

They told me and my stomach dropped. We were all sent home that day.

I rushed home in a calm panic state,  woke up my brother and we turned the t.v. on and there it was. The world had gone mad and chaos had taken over and it looked like something out of a movie.

Chris and I just sat there stunned watching the breakdown of New York happen. People jumping out of windows, the planes, the buildings crumbling…the mass chaos of everyday people just trying to…survive. We just kept saying “This can’t be happening…This can’t be real…” over and over again…couldn’t stop crying.

For the weeks and months that followed, we got to know the stories of the thousands of Americans who lost their lives that day and the superheroes who came in uniforms of firefighters and police officers. The men and women who exemplified the actions of what was good in this world and helped control the devastating scenes of New York before it happened, while it happened and during the aftermath of it all. Remember when just the sight of seeing anyone in uniform made us think and say “Thank you, thank you, thank you.” I do…clearly.

USA pride was at it’s peak. Cars were adorned with American flags, people were going to church in record numbers, people were being….kinder. Seemed like humanity in a way was being restored like never before.

Then the the dust settled and most people went back to the way things were. 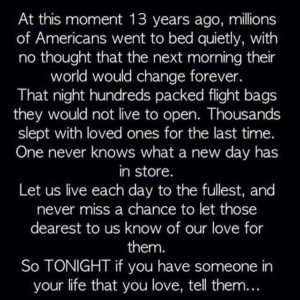 I still believe that this country is great, I still believe that most police officers and firefighters are amazing brave people despite the media showing only the negatives which I believe is so disrespectful to those who are so honorable and good, risking their lives everyday and sometimes dying on the job tragically. I still believe that we can still become a society that can be unified by love, free of racism and religious hatred.

Look how far we have come already…We are not done evolving…We will be good, we will be better, we can be free.

All talk no action is pointless.