(Updated) 50 Shades of Cattiness and Deliciousness

Someone just told me that the only types of women who enjoy the Fifty Shades of Grey books are the ones with horrible sex lives and weak minds. Really? Well let me tell you something…

1. IF the women who read the books are all of a sudden more sexually aroused and excited then kudos to them and for their husbands. A great sex life is so very important in any marriage. All this talk about “We women have to stick together” crap is thrown out the window when we start mocking eachother over a book. Why wouldn’t you want your fellow women to enjoy herself or be happy? If you don’t like the book fine, but stop putting down the people who actually do enjoy it, there is no need for that kind of cattiness. So while you’re sitting here and complaining relentlessly about how women are so stupid for liking the book? There are a ton of lovers out there who are saying Thank you E.L. James! 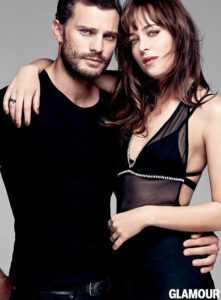 2. I loved the books, super fun easy reads and a fantastic way to escape from my crazy daily life as a SAHM. Sure, it wasn’t well written but I didn’t expect Shakespeare when I started the series.  Does this make me weak minded and stupid? No, it makes me someone who just simply enjoyed a book. Who cares what the content is as long you enjoy it? I personally didn’t even care about the sex in the book, I liked the story.

4. The people who have complained the most about the series of books and movie fall into these categories:

A. Didn’t even read it.
B. Didn’t make it past book 1 and haven’t seen the movie yet.

Sure, that’s enough for you to have such hatred for the whole series and such pitiful judgement towards the readers who enjoyed it.

5. From what I hear, the movie is 2 hours and has 11 minutes of sex in it. There is no rape, no abuse and no torture in it. There are far more movies out there that are a million times worse than this movie. The sex is completely CONSENSUAL and the books are more about love, healing and redemption than all those things Fox news is accusing it to be. I’m not praising the book, nor am I saying that everyone needs to see it. People can see it or not see it, nothing wrong with either choice. I can understand why a lot of hardcore Christian groups might not like it for obvious reasons but these are some of the same people who also believe that gays and certain people who don’t fit into the Christian mold will burn in hell and are living horrible lives. To me, that’s humilation, battery, abuse, controlling, degrading, entrapping, isolating, threatening, manipulating and torturing.

6. I wasn’t cool with everything in the book but to each their own. Whatever floats your boat as long as both parties are on the same page…just like Christian and Ana.

7. I enjoyed the books AND my sex life is awesome. WIN WIN.

If you want to read some well written books of the same genre…check out my favorites!

50 shades was campy, fun and hot!!! Sure, there was nudity but the underlining tones of what they didn’t show was even hotter. Having said that, it was really tame compared to the book. The people who are calling the movie all out abuse and torture…they have absolutely no idea what the heck they are talking about because it was more of a love story than anything and surprisingly quite humorous. The one part that was painful and could be defined as “Torture” she willingly participated and put an end to it immediately and controlled the situation. That particular scene was necessary for the storyline, that’s all I’ll say.

The greatest surprise was Dakota Johnson. I was one of the people who didn’t think she was right for the part at all but she was fantastic. Awkward, sexy and hilarious…she defined the role of Ana. I was TOTALLY WRONG.  Jamie Dornan was great too. He had so many cheesy lines that could’ve gone horribly wrong with a bad actor but he made even the flowery dialogue work. Of course I would’ve preferred Henry Cavill…but he would’ve made it an entirely different movie. The casting director did a great job in hiring these two.

With movies like this, I think it’s imperative to watch it with a great group. I had such a fun time with my girls! I loved the giggling, the “He is so delicious” and the “Daaaaaaaaangs…” I was hearing throughout the movie.

Favorite scene? The negotiation scene and the scene where he bites her toast…literally.
Good Lordy, that was the hotness. The worst scene for me: “Laters Baby” I hated that in the book too but I totally understand why they had to put it in the movie at least once. Thank God there was no inner goddess crap either.

I enjoyed the soundtrack as well. With music by Annie Lennox, Ellie Goulding, Sia, Beyonce, Danny Elfman and other great bands…the music played a large role in setting the pace and mood of the film.

I really love the way Sam Taylor-Johnson filmed it. I hope she comes back to direct the other 2 movies.

I went in with no expectations whatsoever. I knew that it was gonna have some cheesy lines in it, I knew the sex wasn’t going to be ANYTHING like it is in the book because of the R rating and I knew from reading all the reviews on it that it was pretty campy and fun. I just wanted to have a great time with my girl-friends. We all did…we laughed through the cheesy parts, we swooned over Jamie Dornan and we were really impressed by how charming Dakota Johnson was. All of the girl-friends I went to see the movie with want to see it again, hahaha.

I think a lot of people are ashamed to admit they liked this movie…In a way, I could totally understand that but aren’t we a little too old to care what others think? I know I am.

It’s not for everyone but I thought it was great. If you think I’m craycray for enjoying this movie, stand in line.

It was a fun movie…I can’t wait till movie 2!