What People Don’t Tell You When You’re Having a Baby…But Should.

Let’s face it, most people have kids because life tells you that it’s what you should do as a man and a woman. It’s existed from the beginning of time…when you get married you’re supposed to procreate…it’s just a “natural process” of life that’s existed for years and it’s absolutely exciting. So you go through pregnancy thinking “Ok, millions of moms in the world have gone through this so I can totally raise a child too” and you Ohhh and ahhhhh looking at all the cute clothes and little diapers. Then you have your kid and all of a sudden everything changes.

I’m not talking about the lack of sleep, diaper changes and mid-night feedings, I’m talking about the enormous amount of love you feel for your child you never knew existed followed closely with a fresh load of panic you never knew existed. All of a sudden even the person who was so carefree with the attitude of “YOLO!” is a paranoid freak once becoming a mother or father and life just seems so much more scarier at every turn.

There ain’t no sugarcoating real life, yo. 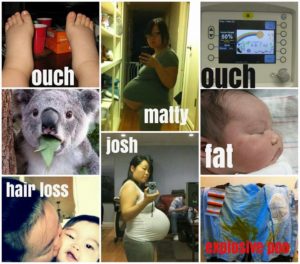 YOU HAVE YOUR BABY THE WAY YOU WANT TO HAVE IT. I had to have an emergency c-section with Josh and had an even more unpleasant birth experience with Matty but the whole process, the whole physical concept of having a child literally come out of you whether it’s via the vajayjay or cut from your belly…there is NOTHING like it and if I had to do it all over again…I’d do it in a heartbeat with absolutely no fear. The female body isn’t just beautiful, it’s ridiculously fierce. Will lovingly slap anyone who ever says that having a c-section is soooooooooooooooooooo much easier than natural birth and that it is less respectable. It can be just as traumatic and painful.

No one ever tells you that once you have kids you won’t be able to sleep comfortably at night or that one way or another, you will be worrying about your kids in every aspect of the word. Let’s not even start talking about the heartbreak that is when your kids get sick even with a simple cold. It is so easy for people without kids to call us ridiculous and crazy but they have no freaking clue as to the dark side that comes with being a parent.

Funny how no one ever talks about it.

It’s always “Congrats! Here’s to no sleep, diapers and midnight feedings!” Never do you hear, “It is going to change the dynamics of your marriage and you’re going to have to work even harder to keep the love going…” and “By the way, having kids comes with somewhat rage emotions you never knew you had where you want to beat the crap out of those who bully your kids or the mini heart attacks that come with your kids getting hurt physically or mentally even if its just a little scrape.” No one ever tells you, “Dude, becoming a parent comes with some dark paranoid stuff  you won’t be able to shake ever even when your kids are 50 years old.” Oh and lets not forget to mention the attitude, constant screaming, fighting, whining and crying that comes in that cute little package you once looked at thinking “my little angel” when they were put in your arms for the first time. The seven words that have been uttered by most parents in existence at one point in their career as moms and dads are “I did not sign up for this!” but yes, you did, you just didn’t “know” cause the thoughts of “my kid will be so much better and won’t be like that!” came into play.

Also, there will be fellow parents who think you’re doing it all wrong and won’t have a problem telling you just that. They have no idea what it’s like on a constant basis and why things are done and said the way they are in your home so unless it’s encouraging and helpful advice, don’t feed into their bs of telling you how to live. They don’t know that everything that is said and done is physically and emtionally catered to YOUR kids, to the family unit as a whole. Unless you live there and see everything happening 24/7, don’t even think about letting them think you could do it so much better.  Also, raising one child versus 2 is COMPLETELY different. You don’t have to deal with the sharing, fighting with one another, the competition, the fight for attention from the parents, playing referee all day everrrrrrry day…So while I’m utterly grateful for any and all parenting advice thrown my way, I’m more prone to take parenting advice regarding some things about raising boys from my fellow moms and dads who have multiple kids who are living similar lives to mine…not because it’s harder with two kids, because raising just even one kid is hard enough, but because it’s just totally different.

There’s also a secret unified club where when you hear tragic news about other kids, you feel incredibly pain as well and your first thoughts go out to the parents but especially the moms of that child because you know what it was like to carry that kid lovingly for 9 months and to have it end in such a senseless way? Unfathomable. Being a parent is no joke…it comes with some hardcore realities that can blow your mind. So if you’re seriously thinking of having kids, don’t do it cause you want to do what everyone else does and/or because as a woman you think you should have the want to have kids.

There’s also people who will tell you that having kids is pretentious and self serving because all you want is a mini you. DON’T LISTEN TO THOSE FOOLS…They have no idea what it’s like to have a child and to freely give your body, heart and soul to someone else. They will never understand the concept of what it means to have a child…and that’s okay. Just don’t let people make you feel crazy with such ridiculous statements.

Do it because you and your partner REALLY want a kid and are ready to give up your carefree kid free lives. And all those pictures where couples are lovingly gazing at each other holding their baby and look happy 24/7? That’s all candy coated crap too in a big way because there’s nothing like having a kid to test a relationship/ marriage as well. It’s a learning process all over again and the fights can be more vicious but if you have a great solid relationship where you respect each other and COMPROMISE, you’ll be just fine.

The art of balancing a solid good marriage, raising kids together, maintaining good friendships with family and friends, doing your job well and taking care of yourself is a delicate dance that is hard…but can be done but in order to do that, there has to be effort and dedication from every single member of the family. There shouldn’t be the whole stigma of “You’re a woman, parenting comes more naturally for you so you should do this and that…” Screw that. You BOTH created a child together, you BOTH get to do it all. It’s a privilege that many people aren’t blessed with so seriously…try and work together.

I’ve also heard people say “You don’t need money to have kids, you can raise them purely on love” is one of the dumbest if not the most naive thing I’ve ever heard in my life cause in today’s world that crap ain’t true. Sure, having kids and raising them is one of the most amazingly wonderful rewarding things ever but it will rock your world physically, mentally and financially in ways you never knew it could. Cause you can half ass through a lot of stuff in life and get away with it but raising a kid? If you respect yourself, your children and those around you, there’s no half assing that.

Lastly, having kids of your own makes you truly understand that there is absolutely nothing wrong with those who do not want to have kids. “But as a woman, you should want to have children…that’s normal!” No sucka, it’s her uterus, her ovaries, HER BODY…and she can do whatever the hell she wants with it and she is still completely normal and all woman. So don’t be the jerk who looks down on women who have no desire to have kids…it’s not for everyone.

The world is full of parents who are half ass raising their kids already…no need for kids to be born out of societal and family pressure.

Some might agree with me and some may continue to think “oh, that crazy Kathy…” and that’s totally okay.

Being a mom and dad is craycray…but it sure is amazingly fun and such an incredibly blessing even when you want to pull your hair out and escape for a little while.

Here’s to beer and wine fridges everywhere that help us get through each day…one sip at a time.

Moms and dads united in solidarity…we can do it! 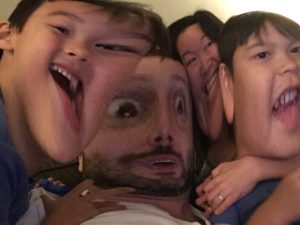