Well, after years of no major incidents, Matty went to his first trip to Urgent care at Kaiser (We love Kaiser!) He hurt himself playing at school and kept on saying his ankle hurt cause he scratched it but there was no swelling around the ankles so I thought he was just being a drama queen. While Josh was at jiujitsu Matty’s right leg started swelling up. He refused to walk on his leg and kept on crying…Well, we went to Urgent Care and the super cool doc said he pulled a ligament pretty bad and will be hurting for a few weeks. I am thankful that it’s not anything major but to a 4 year old boy who wants to run and play, it’s pretty serious business… 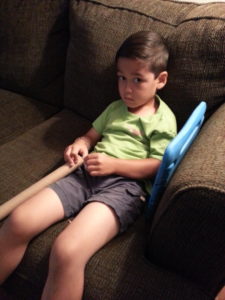 Doc: Does this hurt?
Matty: If I say yes are you going to give me a shot?
Doc: No.
Matty: No, it don’t hurt there.
Doc: Can you wiggle your toes?
Matty: If I can’t, do I have to live at the hotspital?
Doc: No, you can go home tonight for sure.
(Matty wiggles his toes)
Josh: Good job Matty!!
Doc: Can you bend your knee?
Matty: If I can’t are you going to cut off my leg?
Doc: Not at all. There will be no shots or cutting off legs, I promise. Maybe a lollipop and stickers though after we’re done here.
Matty: Only if Josh can get some too.
Doc: Is this Josh?
Matty: Yes. He’s my brother. He thought I was totally faking my hurt leg but I was not but I still like him.
Josh: Yeah, sorry Matthew, I totally thought you were being dramatic.
Matty: Yeah, mommy said that too. A lot.
Kathy: Sorry dude, I should have believed you.
Matty: It’s okay mom, I still like you too.

Needless to say, Matty and I didn’t sleep much…kept on waking up crying:

It was like a Merchant Ivory film come to life here last night.

All kidding aside, he’s definitely hurting. 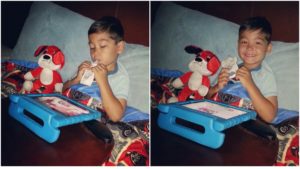 So, I aged about 10 years today thanks to the cray that is my Mayhem Matty.

Matty injured his leg at school (They have been so incredibly sweet checking in on him, one of the many reasons I love Icma) on Tuesday playing and it was initially diagnosed as a pulled muscle.

His right leg and foot looked noticeably swollen and bruised this morning so I took him to the hospital and luckily his pediatrician was available. After xrays and bloodwork, what we had initially thought was a leg muscle injury is a fracture right below his knee frown emoticon

So it’s official, after years of no major booboos for The Kobzeff Boys, Matty ended the Emergency Room free run with a clean break.

Matty has a crazy high tolerance for pain. While mommy and daddy were having a nervous breakdown, he was laughing and joking around with Josh and his doc saying that it didn’t hurt as much and telling me to stop being a big giant baby.

I’m not mad at the doc in urgent care we saw on Tuesday night, nor do I blame him because there was zero swelling and Matty was in a good mood and kept on saying nothing was hurting too bad.

I’m just super glad Mike insisted I take him to get it checked out again and I followed my mommy instincts and did.

As soon as Matty’s doctor told me his leg was fractured, I broke down. 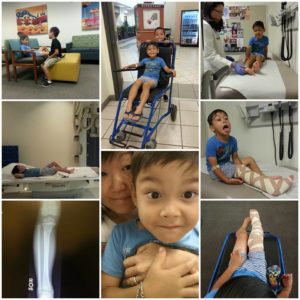 Then the doc said “Do you have a medical degree? Do you have xray vision? He even told me it didn’t really hurt that much, kids embellish at this age all the time and there was nothing visibly wrong with his leg so please don’t blame yourself. You followed your mom instincts and brought him in so you did the right thing.”

I don’t know how parents who have kids with serious illnesses do it because I felt so broken, tired and frustrated carrying and wheeling Matty around worried sick the whole time. I felt like I was going to go mad…Over a broken bone. Compared to other parents, that’s NOTHING.

Tomorrow morning while Mike takes Josh to a fun day of school (It’s important to continue the same routine for the kid that’s fine) and heads into work, I’m gonna take Matty to see a kids Orthopedic doctor to get a cast and get it checked out again.

Today sucked so hard but I know for others it’s sucked even more and to the parents who go through this emotional rollercoaster of complete madness on a daily basis for things much more serious…I applaud you, I admire you, I am in awe of you and I will continue to pray for you.

You are the true super parents.

Needless to say, Matty and I will be spending a lot of time together and while I’m sure we’re going to drive each other nuts, it’s going to be an amazing opportunity for some rad bonding.

Thanks to my friends who called and offered words of encouragement and their help…I’m surrounded by amazing people.

I have to go now, Mayhem needs water with exactly 3 ice cubes in it, a delicious treat, his pillow adjusted and his blanket.

I didn’t get any sleep last night because the doc said to watch out for possible numbness and color discoloration on his foot which means poor blood circulation…which means scary stuff. So I was squeezing and touching his little toes all night and readjusting his leg when he moved into weird positions while he slept soundly. Motherhood, yo.

Took him to see his orthopedic doctor this morning at 8:15 and Matty was very talkative and answered all her questions. As always, the people at Kaiser are so rad. Matty got his super cool Minecraft green cast he’ll be wearing for the next 5 weeks.

I’m just thankful he’s been such a trooper in all this. 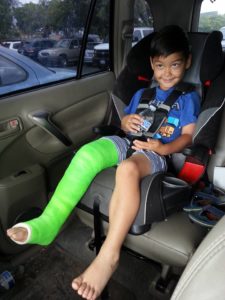 Here’s hoping for no more major injuries for my rambunctious boys. I know, I know…Here’s to wishful thinking.

One tired but grateful mommy,